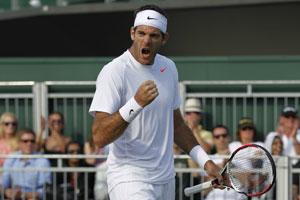 On Wednesday David Ferrer of Spain, lost his quarter final match at Wimbledon to Argentina's Juan Martin del Potro. Apparently Ferrer has been bothered by an injured toe since playing in the French Open final.

Del Potro had his own problems. Early in the match, he fell on his already painful knee. He managed to recover and defeat Ferrer. He will be rewarded with a semi final match against number one seeded Novak Djokovic.

If you injure your toe, foot or ankle, please call my Toronto podiatry office at 416-486-9917 so that I may use the latest technology including Laser Pain Treatment to help get you back in the game as quickly as possible.

Like Ferrer and Dell Potro, I play basketball in pain but I do it for free. There are not very many people who would pay to see me play.

Just in case you are wondering, my favorite tennis player is Rafael Nadal.