Frank Bank, the actor who played Lumpy Rutherford on, “Leave it to Beaver”, the sitcom that many of us remember fondly from the late 50’s and early 60’s, died on April 13, 2013 at the age of 71.  Lumpy, on the show, was a bully, but in real life Bank was considered a very kind and gentle person. 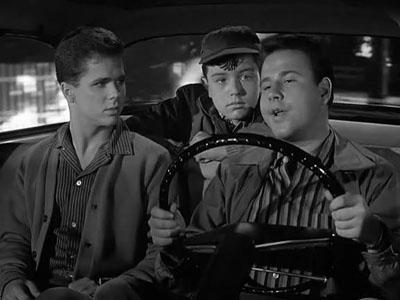 After “Leave it to Beaver” ended in the 1960’s, Bank became a successful stock broker in Los Angeles. He come back to play Lumpy in the 1983 TV movie, “Still the Beaver” and in an updated version of the series called “ The New Leave it to Beaver” in the late 1980’s.  He is survived by his wife, three daughters and five grandchildren.

Trivia questions: What was Lumpy’s real first name? Who played Lumpy’s mother, Gwen on “Leave it to Beaver”? What TV show made her famous?

Leave your answers by clicking on comments.

From left to right: Wally, the Beave and Lumpy