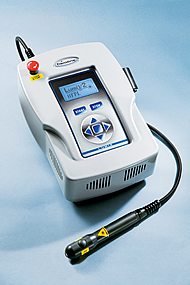 It is now possible to relieve foot pain and inflammation related to plantar fasciitis, heel pain, arch pain, Achilles tendinitis, metatarsalgia, arthritis, bursitis, periostitis and other foot problems without taking anti-inflammatory medication (which can affect your blood pressure, heart and stomach) or cortisone injections (which can be painful and affect your connective tissue).

In my Toronto Ontario podiatry office, I offer super pused laser laser treatments which I often combine with a sound modality called radial wave, pressure wave or radial shockwave,  to reduce pain and inflammation without pills and injections.

These treatments have been featured in Zoomer Magazine, Global Television and Elevate Magazine.

Please call our Toronto foot clinic today at 416-486-9917 to find out how you can be helped and to arrange a private consultation.

What is laser treatment? Laser therapy has been used in Canada and other countries such as Europe, Russia, South America, and Australia for over 40 years.  There are over 3000 published papers on the subject of laser therapy and pain relief!  However, many experts in the field feel that we've just scratched the tip of the surface regarding its possible implications.

The word LASER is an acronym for Light Amplification by Stimulated Emission of Radiation.   As defined by the European Comittee for Standardization, a laser is "any device which can be made to produce or amplify electromagnetic radiation in the wavelength range from 180 nm to 1 mm primarily by the process of controlled stimulated emission."

There are many different types of medical lasers.  They are used in dermatology, surgery, ophthalmology, podiatry, physical therapy, acupuncture, and so on.  However, no matter how sophisticated and wide-spread the indications become, we can break their utilization down into two basic categories - lasers that destroy or cut tissue, also known as surgical lasers, and lasers that heal and stimulate physiological processes within tissue.  We refer to these as therapeutic lasers.

Surgical lasers accomplish their objective through excessive heating of tissue.  They are used to cut, coagulate, and evaporate tissues for a variety of conservative and invasive medical procedures.  As an example, we use a surgical laser for ingrown nail surgery.

Therapeutic lasers are used for the stimulation of cell function.  Their biological effect is photochemical, not thermal, as is the case with surgical lasers.  We use therapeutic lasers for pain management, wound healing, and fungal nail treatments.

History of laser therapy Credit for the development of laser theory is generally given to Albert Einstein.  He first used the term "stimulated emission" in 1916. It was not until 44 years later when someone was able to capture Einstein's theory and manufacture it into a working model.  Theodore Maiman, PhD, presented the first working laser, a ruby laser, in July 1960.

Beginning from the late 1960s, Endre Mester, a Hungarian physician, began a series of experiments with lasers.  He attempted to use high-power laser to destroy tumors in laboratory rats.  To his surprise, the tumor cells were not destroyed by the laser.  Instead he observed that, in many cases, the skin incisions he made to implant the recalcitrant cells appeared to heal faster in treated animals compared to incisions of control animals that were not treated with laser.  This casual observation led him to investigate his suspicion that treatment with red light accelerated healing of the surgical skin incisions.  The experiment was successful - it showed that treatment with red light indeed produced faster healing of skin wounds.  Baffled but fascinated by this development, he carried out other experiments in which he showed that experimental skin defects, burns, ulcers, venous insufficiency, infected wounds, and bed sores also heal faster in response to his laser treatment.

Laser physics The generation of a laser beam results when an energy source stimulates a molecule of the lasing source material moving an electron from a resting state to an excited state.  As the electron returns to its normal resting state, a photon of light energy is released.  The photon continues to collide with other excited molecules causing an amplification of light in the specific wavelength of the source material.  The important point to be remembered is that lasers produce coherent light.

Damaged and compromised cells respond more readily than healthy cells to the transfer of energy that occurs between laser therapy-emitted photons and the receptive chromophores found in various cells and sub cellular organelles.  Laser energy, in the form of photons, are absorbed by specialized light receptors known as chromophores on the mitochondria located within each cell.  This energy causes a cascade of photochemical reactions to occur within the cell.  These reactions promote an increased production of cellular energy in the form of ATP, which then lead to normalization of cell function, pain relief, and healing.  The result is that laser therapy has a significant effect on damaged and compromised cells and tissues while normal cells and tissue structures are appreciably less affected.

Different wavelengths of light have been shown to promote healing of skin, muscle, nerve, tendon, cartilage, bone, and dental and periodontal tissues.  When healing appears to be impaired, these tissues respond positively to the appropriate doses of light, especially light that is within 600- to 1000-nm wavelengths.  The evidence suggests that low-energy light speeds many stages of healing.  It accelerates inflammation, promotes fibroblast proliferation, enhances chondroplasia, upregulates the synthesis of type I and type III procollagen MRNA, quickens bone repair and remodeling, fosters revascularization of wounds, and overall accelerates tissue repair in experimental and clinical models.

What is Laser Therapy?

Laser Therapy, or “photobiomodulation”, is the use of specific wavelengths of light (red and near-infrared) to create therapeutic effects. These effects include improved healing time, pain reduction, increased circulation and decreased swelling. Laser Therapy has been widely utilized in Europe by physical therapists, nurses and doctors as far back as the 1970’s. Now, after FDA clearance in 2002, Laser Therapy is being used extensively in the United States.

Laser Therapy is proven to biostimulate tissue repair and growth. The K-Laser accelerates wound healing and decreases inflammation, pain, and scar tissue formation. In the management of chronic pain Class IV Laser Therapy can provide dramatic results, is non-addictive and virtually free of side effects.

Has effectiveness been demonstrated scientifically?

Yes. There are thousands of published studies demonstrating the clinical effectiveness of Laser Therapy. Among these, there are more than one hundred rigorously controlled, scientific studies that document the effectiveness of laser for many clinical conditions.

During Laser Therapy the infrared laser light interacts with tissues at the cellular level and metabolic activity increases within the cell, improving the transport of nutrients across the cell membrane. This initiates the production of cellular energy (ATP) that leads to a cascade of beneficial effects, increasing cellular function and health.

During each painless treatment laser energy increases circulation, drawing water, oxygen, and nutrients to the damaged area. This creates an optimal healing environment that reduces inflammation, swelling, muscle spasms, stiffness, and pain. As the injured area returns to normal, function is restored and pain is relieved.

K-Laser is leading the way in pain management, tissue repair, safe treatments, and fast treatment times. We are the premier laser company in the USA to offer:

Numerous studies show that Laser Therapy can help with:

Does it hurt? What does a treatment feel like? There is little or no sensation during treatment. Occasionally one feels mild, soothing warmth or tingling. Areas of pain or inflammation may be sensitive briefly before pain reduction.

Are there any side effects or associated risks? During more than twenty years of use by healthcare providers all over the world, very few side effects have ever been reported. Occasionally some old injuries or pain syndromes may feel aggravated for a few days, as the healing response is more active after treatment.

How long does each treatment take? The typical treatment is 3 to 9 minutes, depending on the size of the area being treated.

How often should a patient be treated? Acute conditions may be treated daily, particularly if they are accompanied by significant pain. More chronic problems respond better when treatments are received 2 to 3 times a week, tapering to once a week or once every other week, with improvement.

How many treatments does it take? This depends on the nature of the condition being treated. For some acute conditions 1 to 6 treatments may be sufficient. Those of a more chronic nature may require 10 to 15 (or more) treatments. Conditions such as severe arthritis may require ongoing periodic care to control pain.

How long before the results are felt? You may feel improvement in your condition (usually pain reduction) after the very first treatment. Sometimes you will not feel improveÂ­ment for a number of treatments. This does not mean that the condition is not improving. Each treatment is cumulative and results are often felt after 3 or 4 sessions.

Can it be used in conjunction with other forms of treatment? Yes! Laser Therapy is often used with other forms of therapy, including physical therapy, chiropractic adjustments, massage, soft tissue mobilization, electrotherapy and even following surgery. Other healing modalities are complementary and can be used with laser to increase the effectiveness of the treatment.

Laser therapy was born from scientific research over 30 years ago in Europe and perfected by K-LaserUSA with the latest technological advancements.

Send Us an Email